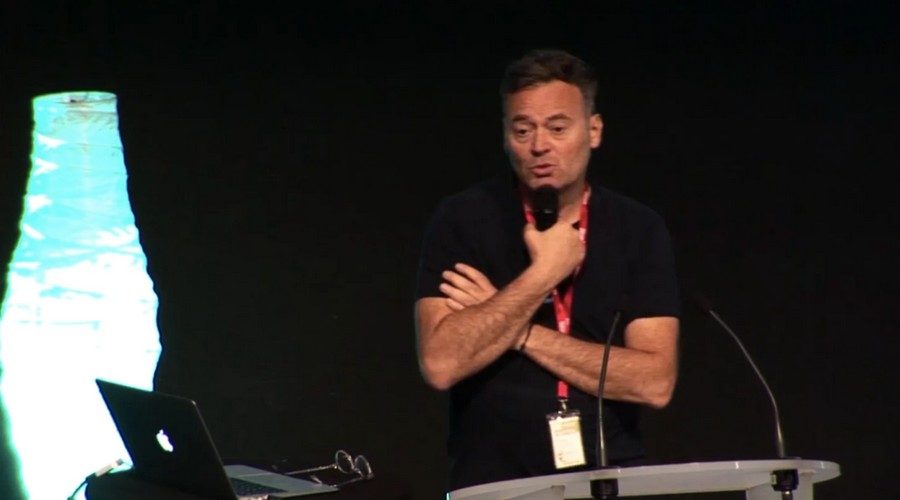 On the occasion of the opening of the Video Mapping Festival #2, Rencontres Audiovisuelles and the DeVisu laboratory of the Université Polytechnique Hauts-de-France offer IBSIC, an annual event dedicated to the video mapping industry, in the presence of international great names in the sector.
Meetings, conferences, case studies, projections… 35 professional speakers will share their experiences and analyse the various aspects of this new sector which is growing significantly (writing, technology, training, production, economic models, projection, etc.).
Networking times will also be provided to meet artists, producers, programmers, etc.

Unlike other sectors, video mapping is poorly subsidised and, without support for creation, its funding depends mainly on the will of the sponsors. However, the discipline remains expensive, because of the material investment and the multitude of skills it requires. In such a context, how can we find a financial balance? On which economic model should we rely on? Do new schemes that are not based on orders or subsidies exist? Case studies and short conferences will allow 5 international professionals to answer these questions and propose new business models.

• Can video mapping find new economic models without a sponsor?
Carole Purnelle for the Lisbon Under Stars project – director and co-founder, Ocubo (Portugal)

• How to develop an artistic career and projects in a professional sector that depends on sponsors?
Romain Tardy – visual artist (Belgium)

Philippe Ligot – president, ATHEM (France)
Investment banker, president of a shipping company, then professional sportsman listed “high level – elite” as a member of the French Sailing Team for 12 years, 8 times world n°1 in Melges 24 and “America’s Cuper”. An INSEAD graduate entrepreneur trained in coaching by Vincent Lenhardt, he is passionate about challenges, strategy, positive psychology and meditation. He joined the ATHEM workshop in 2011, of which he is the majority associate and president.
www.athem.fr

László Bordos – 3D artist, artistic director and director, Bordos.ArtWorks (Hungary)
László Zsolt Bordos, also known as Bordos.Artworks, is an artist living in Budapest. He started as a VJ in year 2000, performing in the underground party culture of the city. With his early 3D-VJing (2001-2004), his participation to huge size architectural slide projections (2002-2005) and his outrageous video projections and 3D mapping projects (2007-present), he became a pioneer of the genre.
Since 2015, Bordos is focusing on solo art projects, light art installations and scenographies projections for theaters and operas, being an active participant in the best light art festivals around the globe.
www.bordos.eu

Carole Purnelle for the Lisbon Under Stars project director and co-founder, Ocubo (Portugal)
Carole Purnelle began her career in project management in the fields of design and IT. In 2004, she founded the Ocubo studio, specialised in interactive cultural and multimedia projects and in video mapping.
Known artist in Portugal and abroad, she has a common theme in her work: “humanity”, which reflects in all her works, considering art as a mean of global expression. She founded and produced the LUMINA Festival of Light in Cascais (Portugal) which counts 7 editions, and she created the Spectrum project within the framework of Creative Europe, which leads national and international creative projects.
www.ocubo.com

Romain Tardy – visual artist (Belgium)
Now a recognised visual artist, Romain Tardy first trained himself in a school of applied arts and at the Beaux-Arts, and then worked for several animation and post-production studios in Paris. At the same time, he is active as a VJ in many events in France and Europe. With this experience, he and 3 other artists created the European visual label AntiVJ in 2008. He was one of the main actors until 2013. His installations, often using video mapping techniques, question our relationship to reality or the place of digital technology in the public space, and aim to evoke these current issues through a poetic approach.
www.romaintardy.com


******************
Organised by Rencontres Audiovisuelles and the DeVisu laboratory of the Université Polytechnique Hauts-de-France, with the support of the European Union, Feder programme, the Hauts-de-France Region, the Communauté d’Agglomération de La Porte du Hainaut, The City of Wallers-Arenberg and Arenberg Creative Mine.