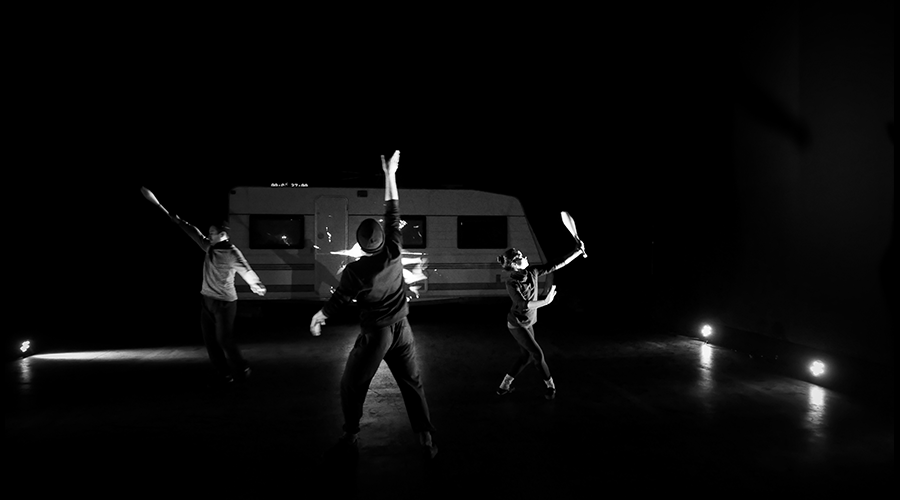 At the end of 2020, a team composed of visual mapping artists, real-time and interaction artists and technicians, a composer/sound designer, and circus artists (a juggler and an acrobatic duo) started a writing residency, with the aim of developing a form of creation combining mapping and circus.

The residency was organised around 2 collective creation sessions at Arenberg Creative Mine:
. 23rd and 24th of November 2020: meeting and exchanges between the artists, writing of the show 2020 : rencontre et échanges entre les artistes, écriture du spectacle
. From 16th to 26th of February 2021: editing and rehearsal of the show
The production of the visuals by the mapping artists took place in January and February 2021 on the Rencontres Audiovisuelles premises.

The show written as part of this residency is called Manantial, and is about the multiplicity of the relationships between Man and Nature. An original work that combines circus and video mapping around a trailer, which also serves as a projection medium.

The creation can be moved and presented both indoors and outdoors.
The first screening will take place during the Video Mapping Festival #4.

Residency organised by Rencontres Audiovisuelles / Video Mapping European Center and the DeVisu laboratory of the Université Polytechnique Hauts-de-France at Arenberg Creative Mine.
With the support of the European Union (Europe is committed in Hauts-de-France with the European Regional Development Fund), the Hauts-de-France Region and the Communauté d’Agglomération de la Porte du Hainaut.