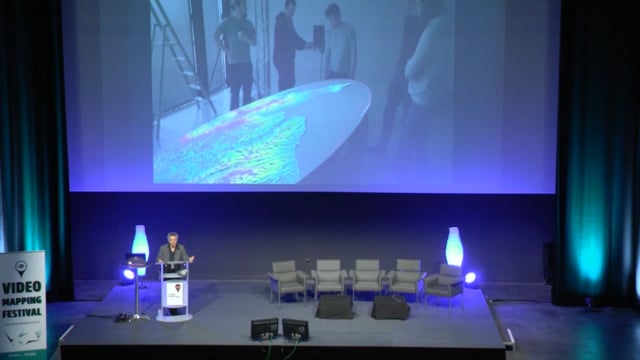 After having tried to establish a state of play of production, creation, and screening of the discipline, let’s talk about specific examples! In the form of a conference, three representatives of cultural projects expose their experience in the staging of concrete video mapping projects.

Franck Bodin (France), researcher at the TVES laboratory, University of Lille, urban-planner geographer
The French researcher Franck Bodin, working for the University of Lille since 2000 within the Territories, Cities, Environment and Society laboratory (TVES), is a geographer/urban-planner and author of publications and scientific works, centred on: humans at the centre of territories, spatial justice, accessibility, civic urbanism and sustainable accessible layouts. Head of a multidisciplinary team, Franck Bodin is the manager of the UP project, which aims at imagining tomorrow’s territories. In partnership with teams of moviemakers and Rencontres Audiovisuelles, he sets a new principle associating image, light, mapping and cartographic approach, aiming at territorial visualisation and appropriation of the questions of layout, citizenship and egalitarian public politics by a large audience.
Franck Bodin will revisit several invested territories: the Communauté de Communes de la Côte d’Albâtre and the ongoing project NormanDisplay with the Normandy Region. When image and light serve a territorial project – an UP mapping.