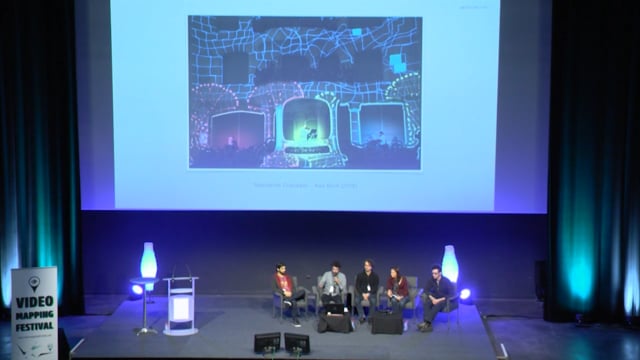 Round table 2: Video mapping and interactivity

By nature, video mapping is a collaborative art. It was built by way of the researches and experimentations of visual artists, video makers, musicians, engineers, developers or theoreticians. By exploring varied application fields, video mapping is more and more linked to interactivity matters.
Contributors of this second round table discuss research, innovation, and prototyping, which allow the production of creations to keep getting more astonishing.
What new language is appearing, and what are those works that are evolving according to their environment? When picture and sound are shaped by a spectator or a performer’s gesture, it is a whole field of creation that is opening to new dogmas.
The participants also try to define the new status of the audience in these works with mobile structures and storytelling.

Moderator: Xavi Bové (Spain), artistic director of the International Mapping Festival of Girona, artist
(moderator for round table 1, 2, 4)
Xavi Bové is a visual composer, passionate about both tradition and innovation, the organic and also the digital. He directs audiovisual projects where art and technology go hand in hand, and where the image keeps a deep and close relationship with the music.
From a technical background as a telecommunications engineer, he soon made the leap to artistic fields such as live music video direction, live visuals, video art, performing and new media art.
In recent years he has specialized in projection mapping, becoming director of FIMG, the International Mapping Festival of Girona in 2016. He has participated in many festivals worldwide as a lecturer, expert or jury. Among his latest creations Moviments Granados – a mapping project in real time with live music – stands out.
www.xavibove.com

Anne-Laure George-Molland (France), lecturer at the University of Montpellier 3
Lecturer since 2010, Anne-Laure George-Molland was head of the Arts and Technologies of Image department at the University of Paris 8 before her placement at the University of Montpellier 3, in 2014. Through her history with art-science specialised in synthesis image, she shares privileged relations with the field of animation and special effect. It is by way of the pedagogy installed in ATI and of the research-creations of the laboratory Image Numérique et Réalité Virtuelle (Digital Image and Virtual Reality) that she tackled a diversity of interactive video mapping experiences. They were made possible because of her acquisition of a double skill in arts and programming, allowing her to lead creations more freely. She now tries to develop this approach within the professional Degree “Audiovisual and New Media Creator” at the University Paul Valéry.

Vincent Houzé (France), artist
Vincent Houzé uses modern computer graphics techniques to create interactive art, performances, and large-scale multimedia installations. His practice centers on dynamic simulations and systems in which simple rules give rise to complex and realistic phenomena.
Vincent Houzé lives and works in New York. He was previously a member of NEW INC, the New Museum incubator for art and technology. Houzé’s recent work was exhibited in the first editions of the Day for Night Festival in Houston, at Google I/O 2017 and as part of the group exhibition “Infinite Dimensions in Digital Art and Beyond” at the MixC Art in Shanghai.
www.foliativ.net

Nuno Maya (Portugal), visual artist and co-founder of Ocubo
In parallel with a solo artist career and several solo exhibitions, Nuno Maya is partner and artist in OCUBO studio, specialized in light video mapping projections, interactive light projections and cultural projects. Their artistic installations and shows contributed to some of the largest International Light Festivals, UNESCO World Heritage sites, monuments and other public places.
Nuno Maya has received numerous awards for his work. He specializes in using interactivity to get a participative public. His work revolves around the theme: “Time and Space” reflected in all his art with a stress on the communication with the audience.
He is co-founder, director and producer of the LUMINA Light Festival that has been a success, driving more than 400.000 visitors on 3 nights show.
www.ocubo.com

Antoine Meissonnier (France), developer at Anomes
Antoine Messonier is passionate about live performance. His encounter with digital arts, about ten years ago, pushed him to make it his job. Since then, he has created interactive sets that merge performance and new technologies. He is also part of the development team of the Millumin software, edited by Anomes. This tool enables the broadcasting of audio, video and luminous contents in the context of live performance or museography.
Antoine Messionnier’s fields of intervention range from theatre to opera, via large installations that he co-creates with the collective LabRat.
blog.anomes.com
www.millumin.com