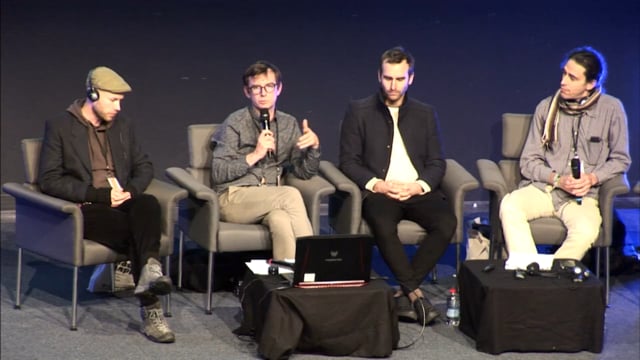 Heir of the vjing in the world of electronic music, video mapping shares fraternal bonds with sound creation.
The artists who have assimilated, in particular through film-making, the co-construction sound/image, offer mature and complex creations.
Visual artists and musicians work hand in hand to bring effective and sensory storytelling to the audiences.
Far from being a mere sound packaging, the sound design is a central element of video mapping. From a spectacular to an immersive experience, including 360° writing, let’s focus on this two-headed creation.

Yohann Bernard (France), sound designer at Start-Rec
Sound designer and editor, Yohann Bernard works for several audiovisual media: full-length features, TV series, animation series, as well as radio creation, advertisement, and video mapping.
It is with the sound agency Start-Rec that he creates sound design on numerous video mapping, like Chroma, on the Amiens Cathedral, the 500 years of the Strasbourg Cathedral, the show for the Liberation of Paris on the front facade of the City Hall, the 30 years of the TGV, on the Gare de Lyon, etc.
yohannbernard.com
www.start-rec.com

Julian Hölscher (Germany), artistic director at Urbanscreen
Julian Hölscher is graduated in design at the University of the Arts Bremen. He worked as a graphic designer for the design company De Silva, Das & Partner and later as a freelance graphic and motion designer. In 2012, Julian joined the artist collective Urbanscreen as an art director. He has been realizing numerous international projects such as Centennial Spectacle (2012, Houston), Crystal Cloud (2016, Lyon) and Present Tense (2017, Luxembourg) among others. His work encompasses large-scale video mapping, augmented sculptures and media façade designs.
www.urbanscreen.com