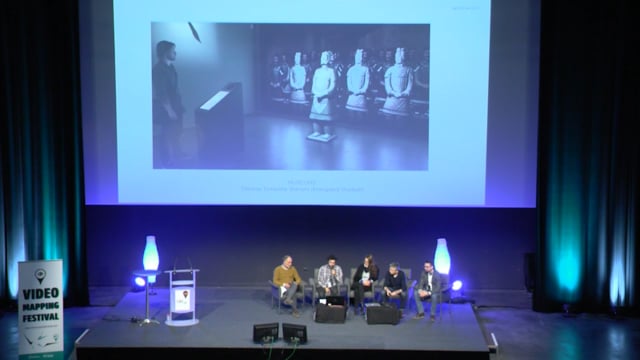 Round table 4: Video mapping, a cultural and tourist influence tool

Unavoidable backers, there are many urban communities that organise video mapping projects. As it attracts crowds, this discipline allows territories to shine, during particular events or in a permanent way.
Elected representatives, technicians and artists work together on attractive projects that highlight the cultural, patrimonial, economical, tourist and political strength of these communities.
Why choose video mapping as a medium? How do projects come to life and develop? What are the stakes for these projects?
So many questions guests try to answer using their experience. Let’s focus on an innovative media tool.

Moderator: Xavi Bové (Spain), artistic director of the International Mapping Festival of Girona, artist (moderator for round table 1, 2, 4)
Xavi Bové is a visual composer, passionate about both tradition and innovation, the organic and also the digital. He directs audiovisual projects where art and technology go hand in hand, and where the image keeps a deep and close relationship with the music.
From a technical background as a telecommunications engineer, he soon made the leap to artistic fields such as live music video direction, live visuals, video art, performing and new media art.
In recent years he has specialized in projection mapping, becoming director of FIMG, the International Mapping Festival of Girona in 2016. He has participated in many festivals worldwide as a lecturer, expert or jury. Among his latest creations Moviments Granados – a mapping project in real time with live music – stands out.
www.xavibove.com

Colombine Bayer (United Arab Emirates), associate director of Nomada in charge of the Sharjah Light Festival
Nomada has been an Utopia for more than 20 years, exploring numerous spaces, ignoring borders, practicing that profession until the edge of the desert. It is a collective research that gathers talented people. The artists, engineers, technicians, students are the craftsmen of that poetical vision of event.
The Sharjah Light Festival is a living model of that utopia for more than 8 years. Creators from all horizons transform the Sharjahian public space into a theatre stage. The streets are lighting up, the architectures are transformed, the parks and gardens metamorphosed.
www.slf.ae
www.sharjahmydestination.ae
www.nomada.ae

Henri Didonna (France), director of L’Autre Canal in Nancy
Henri Didonna is currently the director of L’Autre Canal, Scène de Musiques Actuelles, in Nancy.
Several projects that integrate mapping have been supported by the city, notably during the launch of the “Rendez-vous Place Stanislas” (mapping on three facades), or the organisation of Silent Parties with mapping, and more recently, work for an immersive creation linking Virtual and Reality: Quadriphonia VR.
Henri Didonna has also worked on the staging of Music projects that integrate a digital approach: Stereolux in Nantes and La Gaîté Lyrique in Paris.
www.lautrecanalnancy.fr

Gilles Flouret (France), project manager, City of Lyon, Fête des Lumières
Gilles Flouret manages large projects for the Fête des Lumières in Lyon since 2010. Every year he organises the selection contest for the 30 largest projects of the Fête des Lumières.
His mission is widened to advice and support of projects during collaborations with others cities: missions in China (Zigong) for the Lantern Festival, in Ecuador for the Fiesta de la Luz in Quito, in Colombia for the conception of the opening project of the France-Colombia Year.
He is an adviser and support to the head of events of the City of Lyon during many promotion actions of the Festival, in France and abroad, and leading of the artists’ network.
www.festival-lumiere.org

Tamás Vaspöri (Hungary), co-founder of Maxin10sity Studio in charge of the International Video Mapping Competition for the City of Bucharest
Maxin10sity is a high-class projection mapping production studio driven by passion and creativity. The company was established in 2014 by multi-award winner 3D mapping artists: László Czigány and Andras Sass together with internationally experienced sales specialist: Tamás Vaspöri. They usually deal with building mapping, indoor mapping, car mapping and many more. They have, among other things, done a monumental (at that time world record breaking) mapping for the Façade of the Parliament of Romania. Maxin10sity was also the art director/curator of the whole event. Just like in 2015, 2016 and 2017 being the Art Curator of this event (iMapp Bucharest).
www.maxin10sity.net