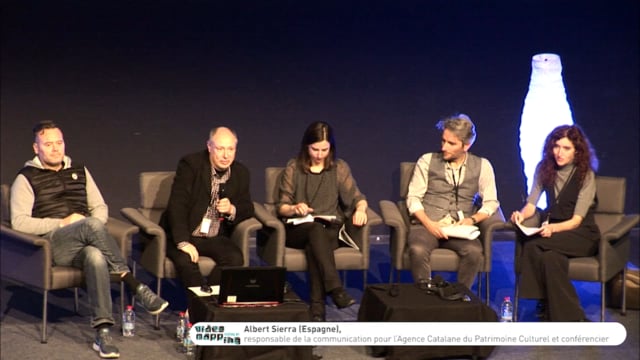 Round table 5: Video mapping and heritage

From monumental projection to intimist laid-out images, video mapping turns out to be an efficient tool for the enhancement of heritage. Urban communities, historical centres, or museums are project promoters that aim at revealing and interpreting traces of History, and rebuilding their link with audiences through video mapping. How do these projects make digital artists, craftsmen, historians cross paths? In between communication, mediation and creation, let’s focus on the new formulas that blow the dust off the notion of heritage.

With:
. Moderator: Alexandra Georgescu Paquin (Canada), researcher and professor at the University of Barcelona for the International Campus of training in tourism, hotel trade and gastronomy
. Philippe Ligot (France), president and associate of Athem – Creation and scenography workshop
. Donato Maniello (Italy), founder and artist of Studio Glowarp, and Valeria Amoretti (Italy), anthropologist and archeologist
. Albert Sierra (Spain), head of communication for the Catalan Agency for Cultural Heritage, lecturer

Moderator: Alexandra Georgescu Paquin (Canada), researcher and professor at the University of Barcelona for the International Campus of training in tourism, hotel trade and gastronomy
Alexandra Georgescu Paquin comes from Montreal and lives in Barcelona where she is head of the Master Degree in Tourism management of cultural and natural heritage at the CETT, of which she also is a teacher. Her research focuses on the symbolic and formal transformation process of heritage, built through contemporary creation, or through addition of architecture and architectural projections. She published a book in French L’actualisation du patrimoine par l’architecture (Updating heritage through architecture) (PUQ, 2014) translated into Spanish by TREA publishers (2015).

Philippe Ligot (France), president and associate of Athem – Creation and scenography workshop
Philippe Ligot is the Chief Executive Officer of Athem & Skertzo, a scenography and creation studio. With his team, he designs impressive shows and work in order to hightlight the development of the French heritage, and its arts. The studio cooperates since 1985 with the public institutions and private owners, and promulgates mainly the culture of monumental events.
Among his productions: the covering of the Louvre Museum, the Garnier Opera, the Château de Versailles, Selfridges in London, Mandarin Gallery in Singapore…
www.athem-skertzo.com

Donato Maniello (Italy), founder and artist of Studio Glowarp, and Valeria Amoretti (Italy), anthropologist and archaeologist
Donato Maniello is Architect, PhD. in “Materials and Structures for Architecture” and adjunct Professor of “Digital Application for the Visual Arts” at the Academy of Fine Arts in Naples. He focuses his research on the relationship that exists between architecture and art. In 2010 he founded Studio Glowarp, a multimedia design Studio specialised in application of Spatial Augmented Reality (alias video mapping) and technologies in heritage context.
Valeria Amoretti is Archaeologist and Anthropologist, she met Glowarp Studio and started to collaborate in the optic to use the light as tool for museum innovation.
Actually, until now she worked in 51 archeological dig, both from University or private companies, she wrote approximately 40 publications and has collaborated in projects dedicated to the study of cultural heritage and the creation of the related storytelling for augmented reality.
www.glowarp.com
www.donatomaniello.com

Albert Sierra (Spain), head of communication for the Catalan Agency for Cultural Heritage, lecturer
For a decade, Albert Sierra has been working on cultural heritage communication. Creating websites, coordinating digital projects and even helping to display virtual Romanesque paintings on the walls where they were painted.
Since 2014, Albert Sierra started a new career in the Catalan Cultural Heritage Agency with responsibilities in communication, new technologies and recently for museography too.
He has done musealizations (Seu d’Urgell Cathedral, Romanesque churches in the Vall de Boí), mapping (# Taüll1123), Virtual Reality projects (Ullastret3d), webs (patrimoni.gencat, fotografiacatalunya.cat) and has written articles and lectured about heritage and new technologies in different universities.