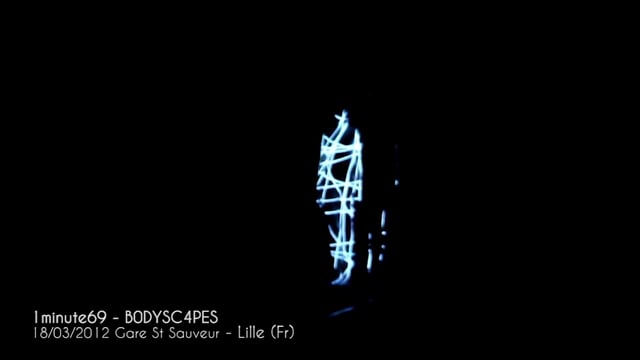 The result of the first collaborative effort by the 1minute69 collective, performance piece B0DYSC4PES is an interactive audiovisual creation that intimately interweaves bodily expression and audiovisual material using 3D tracking and video mapping techniques. Exploring the boundaries of interactive gestural and physical writing, made possible by digital technologies, B0DYSC4PES invites the spectator to shed the usual patterns of bodily perception and question the cultural construct of the individual and identity.
First creation presented at the Live Performers Meeting in Rome in May 2011.
B0DYSC4PES was performed at 20 events in France and Europe between 2011 and 2013.
Creation supported by L’hybride (Lille) and AADN (Lyon).

Started by Aurélie Dumaret and Émilie Villemagne, 1minute69 is a variable-geometry collective, born of a desire for collaboration and exchange between lovers of the digital arts. Linked by a playful desire to plunge the viewer into immersive and/or interactive worlds that stimulate the imagination, the collective’s artists play on illusion and work with the concept of representation through performances, audiovisual installations, architectural projections and video scenography. 1minute69 questions our relationship to representation and the place of the body in our society, through a sensitive and innovative approach.
www.1minute69.com