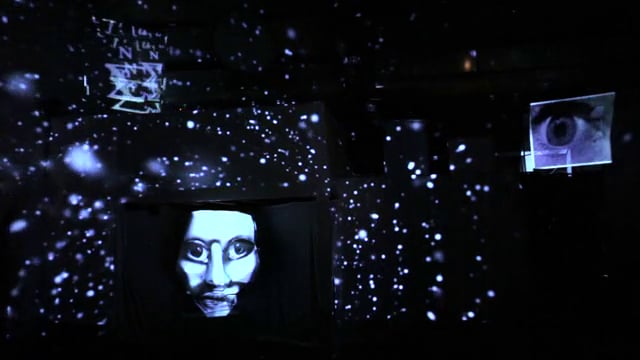 Monsieur Nuage and Digital Mushy presented an immersive video mapping piece, designed especially for the Festival and produced in residency at L’hybride during the summer of 2014.
Drawing on traditional and digital techniques, their two distinct worlds became merged in the installation to immerse the viewer in a parallel world. An invitation to cross the stratosphere and explore a new geometric and undefined space where transparency and reflections form a hovering digital collage…

Monsieur Nuage (Lille)
Monsieur Nuage uses his art to immerse the viewer in his universe: graphic, offbeat and full of colour. Between visual overlays, special effects and textures, he creates a thrilling visual world. Fascinated by images and music, he has been practising video mixing for over a decade and has collaborated with a number of different artists.
monsieurnuage.info

Digital Mushy (Brusselles)
Digital Mushy explored digital arts for five years at the Academy of Fine Arts in Tournai, where he learned how to rewire tools to create installations and projections. In recent years, he has moved into nightlife and sound, incorporating traditional illustration, sculpture, motion design and mapping in his projects.
digitalmushy.com

Rhum Parklab (Le Clan d’Estinnes)
Rhum Parklab is both a member of trip-hop/electro group Le Clan d’Estaing (a project combining electronic beats and traditional instrumental improvisation) and a sonic hacker. With a master’s degree in digital arts, he regularly collaborates on projects that continue to develop the link between sound and image.
romainparklab.wix.com/parklab