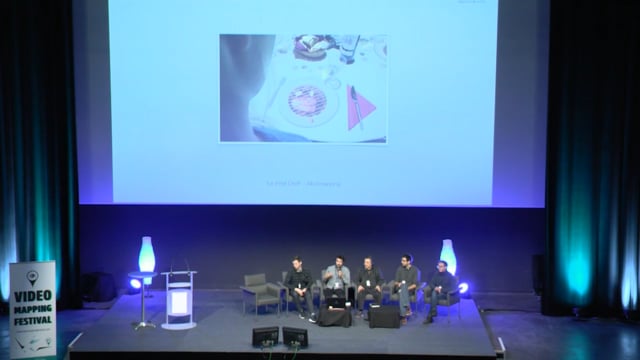 As an introduction, this first round table discusses the rising of new writing techniques in video mapping.
From its early start in 1969 with productions like Haunted Mansion by Walt Disney, followed by the works of Hans-Walter Müller or Michael Naimark to name but a few, artists have experimented every type of video projection on volumes, transforming the technical tools into an artistic discipline of its own.
Video mapping can also be part of a wider system of broadcasting in the film sector, live performances, video games or even contemporary arts. In a nutshell, its status is undisputable nowadays.
Using 2D, 3D or live-action technique, creators reshape the reality of a surface and animate what is motionless. This is appealing to audiences who are fond of new experiences.
From visual work to storytelling, projects are multiplying and present solid writings.
For this first round table, we thus try to discover how video mapping serves artistic intentions.

With:
. Moderator: Xavi Bové (Spain), artistic director of the International Mapping Festival of Girona, artist
. Sergey Baryshnikov (Russia), marketing director at Sila Sveta
. Joseph Lefèvre (Canada), director of the residencies and creation, founder and coordinator of SAT[Mixsessions] at the Society for Arts and Technology [SAT]
. Filip Sterkx and Antoon Verbeeck (Belgium), artists of the Skullmapping collective

Moderator: Xavi Bové (Spain), artistic director of the International Mapping Festival of Girona, artist (moderator for round table 1, 2, 4)
Xavi Bové is a visual composer, passionate about both tradition and innovation, the organic and also the digital. He directs audiovisual projects where art and technology go hand in hand, and where the image keeps a deep and close relationship with the music.
From a technical background as a telecommunications engineer, he soon made the leap to artistic fields such as live music video direction, live visuals, video art, performing and new media art.
In recent years he has specialized in projection mapping, becoming director of FIMG, the International Mapping Festival of Girona in 2016. He has participated in many festivals worldwide as a lecturer, expert or jury. Among his latest creations Moviments Granados – a mapping project in real time with live music – stands out.
www.xavibove.com

Sergey Baryshnikov (Russia), marketing director at Sila Sveta.
Sila Sveta, which translates as “Power of Light”, is an interactive media, turnkey production and conceptual design company based in Moscow and Los Angeles. The studio is engaged in the development and implementation of creative concepts, interactive installations, event and art projects, production of multimedia content and bespoke software development. Their portfolio includes immersive experiences, virtual reality shows, 3D projection mapping on landmark buildings, stage design for events including the Coachella Festival, and grand museum installations, such as Mission Mars for Space Center Houston. They use their high-end technologies to turn dance performances into the dreamiest spectacles (America’s Got Talent in 2016 or the award-winning Levitation piece).
silasveta.com

Joseph Lefèvre (Canada), director of the residencies and creation, founder and coordinator of SAT[Mixsessions] at the Society for Arts and Technology [SAT]
Joseph Lefèvre is the director of the artist residencies at the Society for Arts and Technology [SAT] in Montreal. He is the co-founder of SAT[Mixsessions], a platform of expression for electronic creators in audio and video.
Founded in 1996, the Society for Arts and Technology [SAT] is an internationally recognised organisation. With its threefold mission as an artists centre, a research centre and a digital arts training centre, SAT has been created to support a new generation of creators/researchers in the digital age. Within its 4 400m2 premises one can find the Satosphere, a permanent modular dome, dedicated to the development and the presentation of 360° immersive experiences.
Joseph Lefèvre is also a new media artist. He creates digital and interactive artworks. His Le Café de l’abattoir (ACM SIGGRAPH 1992), On the Riverside, Turbulence.org commission presented at the Cyberart Festival of Bilbao and L’expérience du sacré (National Museum of Fine Arts in Taiwan, 2010) are some examples of his projects.
sat.qc.ca
studiojocool.ca

Filip Sterkx and Antoon Verbeeck (Belgium), artists of the Skullmapping collective
Skullmapping is an artistic collective founded in 2010 by Filip Sterckx and Antoon Verbeeck
Filip, who is the creative director of Skullmapping, has gained global recognition with his music videos for Selah Sue and Willow. He started his first experiments with projection mapping over ten years ago, resulting in poetic art installations in which he projects video and animation on sculptures.
Antoon is a visual artist. Over the last 25 years he has been working as a succesfull figurative art painter and runs his own gallery in Leuven, Belgium. His paintings can be recognized by a strong 3D illusion. His so called Lonely subjects, in the middle of a big white space, provoke a meaning that is poetic, evocative, and often with a funny witticism.
www.skullmapping.com